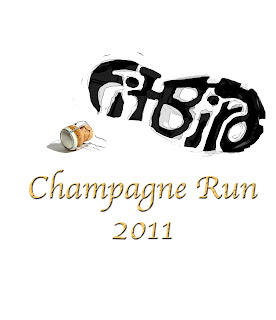 It was original although some might say peculiar. Either way it was an incredible way to end another hard year of team training. To what do I refer? I am referring to what will now be known as the annual FitBird Champagne Run ~ a morning New Year's Eve team training run around the LSU lakes followed by champagne, mimosas, muffins, and music!

As with many FitBird adventures, this one started as an impromptu flag planting that got little response until it was re-vamped with the promise of champagne and fun after the training run. It held true to its promise, and after a training run that was kind of like playing "best ball" in golf (in other words a run that was decided by who had the best training peaks plan for the day), the champagne began to flow and our presence in the parking lot of the City Park tennis courts became obvious to all around.

It's these times that it is clear to me what it means to be a FitBird. We displayed to the community a team being supportive of each other and having fun. Support was demonstrated during the run as some members were encouraged to stick to their plan as it was written and go solo to stay focused on their upcoming goals, or it was demonstrated by the merging of plans in order to run in small groups to push each other to go farther, or by each team member high-fiving and cheering the "faster" birds as they made their way in reverse around the lake at a quicker pace timed just fast enough to get back in time for the after-party. Effort was made to run with strangers and encourage them to join in on the fun. A recruitment drive of sorts began to form as vehicles were stopped to encourage new faces to become FitBirds, and champagne and muffins were offered to contacts that members have made during their training. 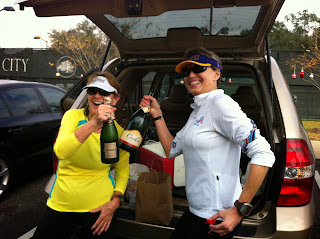 Surely it had to have been quite the scene... a range of ages, abilities, and backgrounds of ladies who were sweaty, laughing, eating muffins, and making mimosas in a parking lot at 10 am while ukulele music played in the background. As the last runner arrived she was greeted by a musical chorus of "She's all smile, all smiles, all smiles" and received a finish line "wave" of sorts as she was handed a drink. I mean, where else do you get that??

We became such an attraction that heads turned as vehicles drove past, and finally one male runner requested his picture be taken because his wife would never believe him. 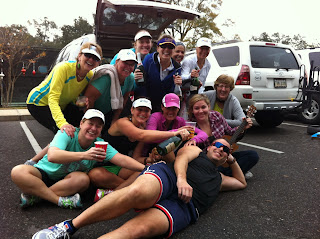 Thanks to Lizard for instigating this first run, and to all who contributed in making it a success! Thanks to FireFly for the trunk buffet, to Crash for the fancy cheeses, and to SWMFU (Joyce's Indian Name - Stand with Middle Finger Upward) for the homemade handpicked blueberry muffins! Thanks also to Poly for making sure that FireFly didn't have to worry about filling up her fridge with half-empty bottles of champagne once the party ended...

Another EPIC adventure and the first of many Champagne Runs to appear in our future!!
See you all December 31, 2012!!
Posted by Unknown at 11:33 AM